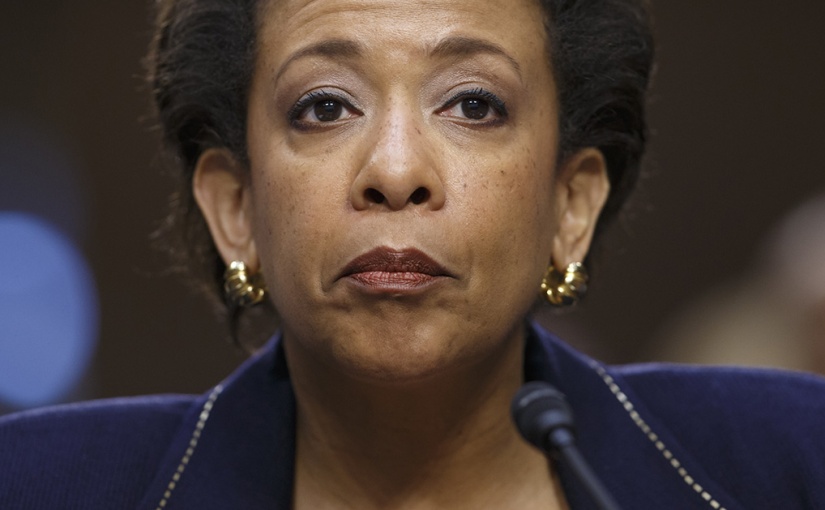 “Loretta Lynch, the first African-American woman nominated to be attorney general, is asked to sit in the back of the bus…That’s unfair. It’s unjust,” Durbin said before a giant poster of the smiling Loretta Lynch.

Of course, Republicans have every right to hold up Lynch’s nomination. For starters, Senate Democrats broke faith by filibustering a bipartisan bill aimed at staunching human trafficking. In their view, taxpayers should pay for the trafficked women’s abortions–a position they did not hold as they voted for the bill unanimously in committees and unanimously in an appropriations bill. Secondly, elections have consequences, among which, for the minority party, include concessions to the will of the ruling majority (see Exhibits 1 and 2).

“The very white, very male Republican Party has managed to get itself caught in another thicket in the hostile terrain of identity politics…Democrats…know…the GOP’s troubles with women and minorities worsen each day McConnell delays.”

Democrats rely on Milbank’s assertion being correct, which is why Durbin, a high-ranking Democrat delivered the despicable charge, and why McCain, a high-ranking Republican, was the right choice to shoot it down.

“Perhaps my colleagues, and the senator from Illinois in particular, need to be reminded of their own record when it comes to the treatment of African American women whose nominations were before this body,” McCain said of Durbin’s filibustering Janice Rogers Brown. McCain could have mentioned Durbin’s filibuster of Condoleeza Rice as well, but bringing up Durbin’s 7 filibusters of Miguel Estrada (the first latino nominee to the D.C. Circuit Court of Appeals) helped make his point well enough.

As usual, though, the facts give way to politics in the President Barack Obama’s case. Obama engaged in his routine use of hyperbole, asserting that the Republicans were holding Lynch “hostage.”

Forget that Democrat gamesmanship led to this “hostage crisis.” Kimberly Strassel’s piece in the Wall Street Journal attacks a leg of the Democrat’s cynical claim and puts it into proper context.

“Similarly laughable are Democratic claims that Ms. Lynch has now waited longer than any AG nominee since Ed Meese in 1985. That number only works if it includes all the time last year that Mr. Reid, who was still running the Senate (remember that?), didn’t act on her nomination. He was too busy packing the courts with Obama judicial nominees.”

Furthermore, on the subject of hostages, it is President Obama whose veto of the bipartisan bill to build the Keystone XL pipeline made “hostages” of the thousands (though not 42,000) hoping that Washington’s cantankerous politics would yield long enough to bring them into the workforce.

What about the women and girls tortured and brutalized by human traffickers? Are Democrats not holding them hostage so they can violate the Hyde Amendment and force taxpayers to fund abortions?

Indeed, it is the Democrats who are guilty of malfeasance in this affair. They have managed to play the Race Card, the Gender Card and the Terrorist Card all in the same hand. The trump card, though, is the massive Republican victory in 2014. The Republicans are right to hold up Lynch’s nomination absent Democrat acquiescence on conservative policy goals.

And so it shall be for the next year and a half.

2 thoughts on “Loretta Lynch is a Hostage. Who are Her Captors?”