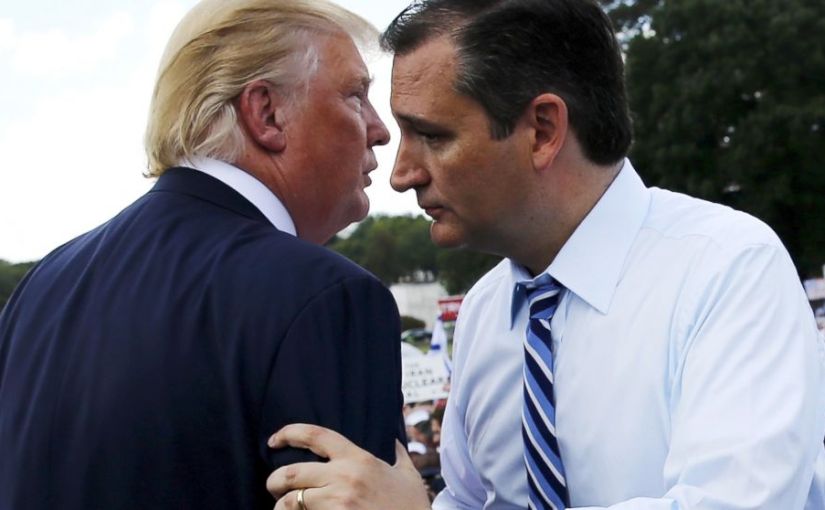 The 2016 Republican Nomination race, simplistically cast as a competition between “Establishment RINOs” and the “True Conservative” base, illustrates a destructive psychosis currently infecting the GOP. Paranoid voices on the right insist that the party is under siege by a liberal cabal of kamikaze Republicans–RINOs, The Establishment. Stemming from political messaging, which, by nature, emphasizes oppression and persecution in order to connect voters emotionally to candidates and policies, this narrative divides Republicans and paves the way for Democratic victories.

“There is a part of the GOP power structure,” Hayward writes, “that has always been most happy to serve as the permanent minority, personally enriched by serving as minor, ineffective obstacles to the ruling Left. They win elections by cadging millions from conservatives desperate to Do Something about the mess in Washington, then sink comfortably into that mess as though relaxing in a jacuzzi, rousing themselves only to display true fury against the occasional cage-rattling, boat-rocking conservative insurgent.”

Who, in the “GOP power structure,” is “happy to serve as the permanent minority?” Who is “personally enriched” by powerlessness?

The immediate response RINO Hunters gave to these questions used to be Speaker John Boehner, the man  who tearfully wrested the Speaker’s gavel from Nancy Pelosi in 2010, heeding the call from the “cage-rattling, boat-rocking conservative insurgents” known as the Tea Party. Boehner promised to curb federal spending, and he delivered–cutting the deficit by three quarters during his tenure. He rallied every single Republican House member to vote against Obamacare. He protected the Bush Tax Cuts from expiring on all Americans.

This wasn’t enough to placate Pharisaic Republicans, though. The Daily Caller’s Guy Bentley reports that Boehner left the Speakership with only 24% of Republicans viewing him favorably. A YouGov word cloud showed that the most common words used by Republicans to describe Boehner are “quitter,” “spineless,” “weak,” and “RINO.” Given that level of gratitude for successfully stymying President Barack Obama’s agenda from one house of Congress, it is no wonder the GOP struggled to replace Boehner.

But, we eventually did–turning to young, Republican budget hawk, Paul D. Ryan.  His credentials, used to quiet RINO Hunters who had recast the 2008 conservative standard bearer Mitt Romney into the role of the 2012 RINO, haven’t protected him from the cannibalistic right-wing media. Breitbart’s Alex Swoyer calls Ryan “unchained.” Vox Day, of the bizarre World Net Daily, calls Ryan a RINO. So does syndicated talk show host, Joe Walsh. And on and on the monkey chases its tail.

So, “Where Have All the Conservatives Gone?” asks satirist Paul Shanklin.

Ask Hayward’s “cage-rattling boat rockers” who 2016’s true conservatives are, and they will likely to point to the two current Republican frontrunners: Donald Trump and Ted Cruz. Understanding how these two candidates have come to epitomize a conservative ideal requires one to know nothing of conservative principles at all.

Trump, who openly boasts about his massive donations to politicians on both sides of the spectrum, somehow eludes the Establishment stamp. Beneath his crass, classless ad hominem attacks lie his big government fairy tale policy “ideas.” Not only will building a wall along the southern border do nothing to stop the more than 40% of immigrants who overstay their VISAs, but it cannot be constructed (on Mexico’s or our dime) because of eminent domain issues and its prohibitive costs.

Trump’s plan to Institute a ban on all Muslims entering the country is even stupider. If you were an Islamic terrorist bent on killing Americans, would you tell a customs agent that you’re a Muslim? If you weren’t a terrorist, but just a Muslim, who would pay for your return flight?

Debating his “wrong-but-strong” policies is pointless because they can never happen.Finally, and most importantly, Trump loses to Hillary Clinton (whom he paid to attend his most recent wedding) in every single poll Real Clear Politics uses in its aggregates. Interestingly, the Republican Establishment that is “happy to serve as the permanent minority” doesn’t support Trump.

Ted Cruz came to fame by vacuuming up money from gullible donors during his 2013 government shutdown. To this day, he offers no explanation as to how shutting down the government would have defunded Obamacare–a piece of legislation that was already paid for via past appropriations. After a closed-door meeting with Republican Senators yielded no strategy answers from Mr. Cruz, one Senator said:

Then, again, even if the shutdown could have produced a budget that slashed Obamacare, no one (not even Cruz) believes that President Obama would have signed it. Yet, despite this, Hayward didn’t include Cruz in his admonitions of Republicans who are “…personally enriched by serving as minor, ineffective obstacles to the ruling Left.”

And herein lies the problem: The constant bleating about RINOs and the Republican establishment smacks of insanity when scam artists and Establishment candidates are forwarded as the answers to this so-called problem. The very conservatives who argue that “words have meaning,” abandon the very meanings of words like “amnesty,” “RINO,” and “Establishment,” if doing so allows for masochistic catharsis.

RINO Hunters are true RINOs (as they don’t care about the Party) who wish to shrink the GOP by way of purity tests and fanciful policy prescriptions that feel good, but do nothing. Trump led gullible conservatives down the Birther path, and Cruz down the government shutdown path– both for self aggrandizement. RINO Hunters are “happy to serve as the permanent minority,” and their banner candidates revel in being “personally enriched by serving as minor, ineffective obstacles to the ruling Left.”
Enough already.