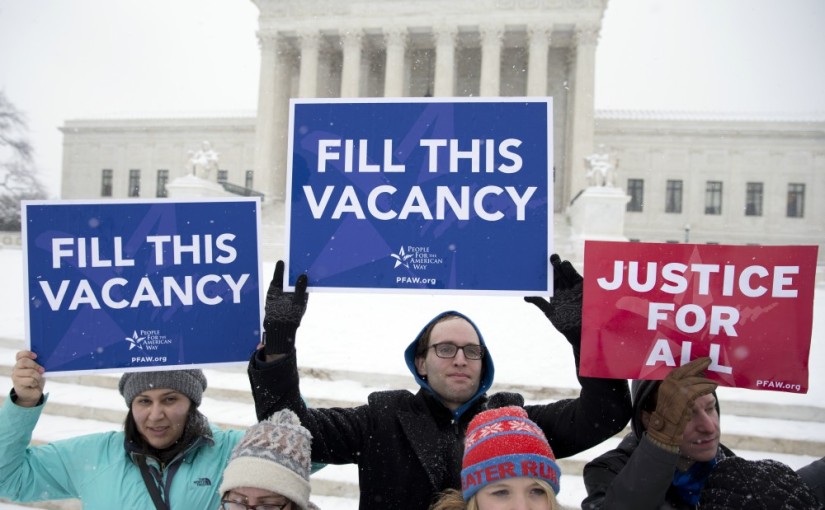 Democrats’ current apoplexy stems from Senate Majority Leader, Mitch McConnell, refusing to confirm any of President Barack Obama’s Supreme Court nominees to replace the late Associate Justice, Antonin Scalia. Ruth Marcus, at The Washington Post, calls the Senate (in)action a “sit-down strike,” in a piece titled “The GOP’s dangerously dogmatic Supreme Court Obstructionism [emphasis added].” Kathleen Parker, of the same paper, fancied that Scalia would regard the Senate’s move as “childish.” Governor Andrew Cuomo weighed in on the controversy calling the Senate’s recalcitrance a “disservice.” Truthfully, however, none of the Democrats’ lachrymose complaints or apocalyptic warnings can obscure their nakedly political origins. Moreover, their feeble appeals to principle and institutional respect attempt to mask a more powerful critique of modern liberalism–namely, its authoritarian impulse.

Finding evidence that Democrats care less about institutional integrity than they do about their own political ends proves a simple task. Consider the absence of liberal outrage when Senator Chuck Schumer (D-NY) said in 2007 (under a Republican president), “I will recommend to my colleagues that we should not confirm any [George W.] Bush nominee to the Supreme Court except in extraordinary circumstances.” He went on to say that Senate Democrats should “reverse the presumption of confirmation.” Nine years later, Schumer argues that his words are no longer relevant.

In 1992, Vice President Joe Biden (then a U.S. Senator) advised the same course of action against George H.W. Bush.

“It is my view,” Biden said, “that if a Supreme Court Justice retires…President Bush should consider following the practice of a majority of his predecessors, and not–and not–name a nominee until after the November election is completed.” He goes on, “It is my view that if the President…presses an election year nomination, the Senate Judiciary Committee should seriously consider not scheduling confirmation hearings on the nomination.”

Despite the evidence that McConnell’s move simply constitutes run-of-the-mill obstruction, Ruth Marcus argues that “[shutting] down the confirmation process would be bad for the court, [and] bad for the country.” After all, she says, in regards to important cases, an 8-person Court cannot offer a majority opinion. Furthermore, “Citizens deserve conclusive answers on issues important enough to reach the high court…”

Of course, the Republic will not disintegrate because Obama doesn’t get his judge. Our legal system addresses her concerns, remanding 4-4 split decisions to the lower court. Citizens, therefore, will receive the conclusive answers to the pressing political issues that they deserve. Crisis averted.

So if McConnell’s move does not threaten the nation, the Court, or Senate integrity, why are liberals so enraged? Because liberals are by nature authoritarian, and the balance of powers threatens that disposition.

Wail as they will about elections having consequences, and how that means that the twice elected President holds a mandate to appoint Supreme Court justices unimpeded. If elections really are mandates, the will of the people to staunch the Democrats’ agenda occurred more recently and definitively. Contesting that low voter turnout for midterm Congressional elections favors Republicans, Democrats unwittingly acknowledge that their voters prefer to enact their will through the Executive Branch, which explains why they stay home for midterm elections.

Consider, for example, that President Obama’s greatest critics express vexation on account of his unilateral disregard for the other branches of government: We regret that Obama circumvented governmental checks and balances to implement a non-treaty treaty with Iran. We abhor Obama’s executive order granting amnesty to millions of illegal immigrant children. We criticized his public reproach of the Court in his 2010 State of the Union address–signalling contempt for a Court because it delivered a decision with which he disagrees. Even the President’s signature achievement–The Affordable Care Act (ACA)–passed undemocratically: The bill skated through the Democrat-controlled Senate which had changed the legislative procedural rules ad hoc after Scott Brown, a Republican who promised to be the deciding vote against the ACA, won Ted Kennedy’s Massachusetts Senate seat. Democrats, have always cheered the imposition of their agenda–especially when they can use authoritative means to enact it.
Mitch McConnell has a perfectly legitimate right not to confirm any Obama nominees–and the Democrats know it. Falling for the Left’s newfound respect for august federal institutions means falling for deceit. Their expressed concerns about the Court and the Senate as institutions provide scant cover for their open lust for unaccountable liberal power. In the meantime, both parties stare down a fateful 2016 election with an eye on Scalia’s seat, and on a few others as well.