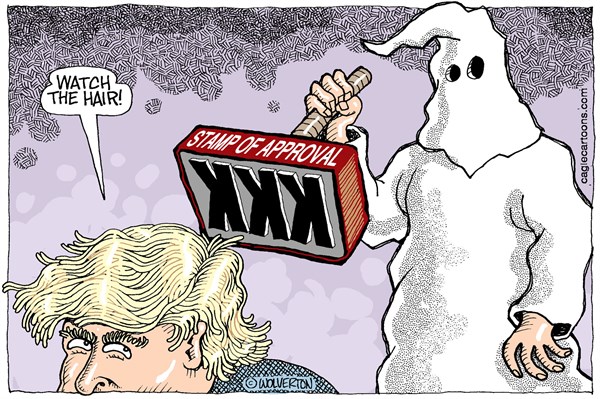 David French wrote a piece in National Review that speaks for many Republicans in the post-Trump GOP who find ourselves gobsmacked by President Trump’s remarks following the clashes in Charlottesville over the weekend. Those of us who read the 2012 autopsy report and took heart that the party may finally do what it takes to attract more voters and slough off the smear that the Republican Party offers safe haven for white supremacists and racists, excitedly backed every other 2016 primary candidate–except the one who won. The candidate who won traffics in alt-Right conspiracy theories (prominently, in the Birther Conspiracy Theory), prejudged a judge’s ability to do his job based solely on his ethnic background, and dragged his feet to disavow the support of open racists–namely David Duke. His defenders insist that we ignore these data points, attributing them to the inevitable ugliness of modern presidential campaigns; and to consider as coincidences that his Attorney General is named after Confederate heroes, and the head of his legal team shares the name of the most overtly racist baseball player in American history. Indeed, these may be coincidences. However, given the president’s bizarre inability to assure the country that he resents racism as much as he does Mika Brzezinski, that once-tenuous smear against the party that ended slavery appears more tenable. Responsible Republicans resent this.

“What the hell do you have to lose,” Trump asked a black audience who he hoped to sway to support him in the general election. What blacks (and other decent Americans) have lost thus far is a head of government with the moral clarity to reflexively denounce our most embarrassing citizens–you might call them “deplorables.” These Nazis, Klanners, and terrorists, attacked and killed counter protesters; and while one may argue that the counter protesters may have started some of the physical altercations, there is proof that a large contingent of them came to protest peacefully. That cannot be said for the racists, who appeared carrying shields, helmets and firearms.

Responsible Republicans know that the Trump Administration is the disaster we predicted long before it started. Rather than uplift the party and direct it toward a common goal, it has exacerbated Republican infighting, confirmed the worst stereotypes about conservatives, and marginalized the best members of the Party for those Buckley expelled decades ago.

Add Charlottesville to the fire.

Most depressingly, though, we have a president ill-suited to constructively address these issues.